Hello you lovely lot! Sorry I haven’t been up to scratch with my blogging routine at the moment, it’s just been quite a tiring few weeks and I’ve needed to focus on myself, my health and my family before worrying about blogging too!

Today I’ve decided to do another Q&A, this time all about relationships and friendships. I always like to have a specific topic to focus on so I can share as much advice about it as I can, rather than dabbling in a few topics and not really giving any good quality advice (not that you’ll think this is good quality advice but I can give it a go).

These questions have come in from the lovely gals over on Instagram and Twitter (they’re the best) and include everything from Will and I, to moving on from friendship heartbreaks, so here we go…

Q. “How did your relationship start?”

So, Will and I met at school in sixth form- I had moved to Alcester Grammar School from Stratford-upon-Avon School and Will had moved from KES (those of you in the area will know what I mean), but basically he moved from an all-boys school. We first saw each other on the school bus we both took home- I was sat next to one of my best friends after our second day at school and I just remember Will sitting near us and staring- we thought he was a bit of a weirdo to be honest haha. Then I properly met him in class a few days later as we were in the same Psychology class and he seemed like an alright guy. I sat near him and next to one of his friends at the time so I ended up chatting to him in little bits throughout the week. My friend from before also got to know him and we ended up all sitting on the bus together and walking home every night as he lived a couple of streets away. Fast forward to the middle of our last year at school, I had a major crush on him but just assumed it would never happen as we were going to be leaving school soon. By this point Will had learnt to drive and was giving me and my friend lifts to and from school everyday so I got to know him a lot better and finallyyyy on the last week of school we admitted to liking each other (I had NO idea!), but not through words, just by being super flirty with each other and him asking me to prom via text (typical). So from then we’ve been together ever since- I’ve known him for four and a bit years and we’ve been dating for around two and a half!

Q. “Do you have any tips on making new friends as an adult?”

This is such a good question as I feel a lot of people can struggle with this, me included. It always seems so much easier making friends as a kid than as an adult- adults can be a heck of a lot more judgemental which never bodes well with fragile new relationships- it makes us feel more on edge and less willing to open up to each other.  I’ve come to realise over the years that not everyone is going to like you- there’s this quote I love- ‘You can be the ripest, juiciest peach in the world, and there’s still going to be somebody who hates peaches’. No matter how much you try and please people or how kind you are to them, there are going to be people you just don’t gel with and that’s completely natural! My number one tip for making friends as an adult would be to not let your worry of what others will think of you get in the way of being your authentic self. Be as open as you feel comfortable with, be kind, be yourself and if it doesn’t work out, it doesn’t work out but that’s nothing to do with you. Just treat this new person how you would like to be treated and try and find some common ground, whatever that is, and go from there. Good luck lovelies!

Q. “As an actual fan of you and Will I want to know everything about you”

A. This comes from my gorgeous friend who I haven’t actually spoken to about Will all that much and made me chuckle when I received it. As you all know how Will and I met, I guess I’ll just explain what’s happened since we left school. Will went off to Aberystwyth and I went to York which was pretty hard- six and a half hours on the train is not easy business. We saw each other as much as we could but tickets were expensive and it took a good chunk of the day to travel to see each other so it was difficult. It also didn’t help that I was really struggling at uni which made every time I said goodbye to him even harder and every day in between seeing him seem like a lifetime. But, since I dropped out of uni in January it has been a little easier. It’s been really tempting to go and visit him at every opportunity I can but a) that’s not good for anyone’s bank account and b) it is important to have our own lives and not always be counting down until we see each other. I feel like now we have a much better dynamic- I see him every other weekend (if we can) for a few days and the longest we go is three weeks which seems to work well. I can get on with stuff at home and focus on recovery, my hobbies and everything else I want to do and he can get on with work at uni while looking forward to seeing each other every couple of times a month. This is our last year of being long-distance and I am SO excited- imagine being able to see him whenever I want!!

We’ve also had our bad times though, of course when I was really struggling at uni it was hard as he wanted to help but couldn’t as he was so far away, and we’ve had struggles to do with this family and whatnot but overall we are stronger than ever and I couldn’t love him more.

A couple of facts for you if you’re interested:

– We’ve been on holiday four times together but to be honest, every time I visit him in Aber feels like a mini holiday!

I love this question! Honestly my dream 21st party would be to get all my blogging gals together and have a fab day buttt seeing as that most probably won’t be possible I’ll just have to hypothetically plan instead. So, wed start by going on a lovely walk and just get used to chatting to each other in person and then we’d go for a lovely lunch somewhere- afternoon tea or an ice cream parlour maybe? And take lots of photos and perhaps go somewhere pretty like my town centre or wherever we are and take loads of photos, being each other’s cheerleaders! Then we’d have a cosy night in, hot chocolates all round in our pyjamas watching the Great British Bake Off or something equally as lovely!

Q. “What’s the most important thing in a long-term relationship?”

Honestly I think the most important thing is to use be completely honest with each other. I’ve always been quite an open person but Will really hasn’t and he never used to tell me when he was annoyed with me or struggling with something in our relationship and I would struggle to tell him things that were upsetting me with people in his life. Since we had a bit of a break earlier this year (it was so so hard but needed) we have grown so close and just tell each other what we’re feeling- he’ll tell me if I’ve annoyed him and I’ll tell him if something is upsetting me. Having that trust that we will tell each other how we’re feeling makes everything so much easier and we can sort any problems out in minutes rather than it playing on our minds. I feel most guys do find it hard to express how they’re feeling, and Will has struggled with this in the past so it’s not perfect yet, but we’re always honest with each other and will always support each other through anything.

If you want to read a fab blog post on long-term relationships, please go and check out my lovely friend Hannah’s recent post! You can find it here

Q. “What have you learnt from past break ups/losing friends?”

That no matter how much you want a person to be there for you or how many chances you give them, if a friendship/relationship isn’t right, it won’t last. I’ve had it tough the last year or so with losing my best friend because she just didn’t want to be there for me any more. It was a big shock as she had been there for me throughout losing mum, being bullied at school and other things and for her to just give up on me because of my mental health was horrible. I also found out some stuff she had done whilst I thought we were good friends which also hurt a lot but I know I’m so much better off without her (something that has taken me nearly a year to realise). People aren’t always the individuals you thought they are and with me, I always always want to see the best in people which is why I give people so many chances after they’ve hurt me the first time. It’s usually my loved ones around me that point out they’re not going to change and that there’s nothing I can do to make them treat me with more respect, no matter how many chances I give. I think it’s important to recognise when someone isn’t treating you right and to call them out on it- I’ve done that with both my ex best friend and a girl who treated me awfully online and they usually get defensive and make it seem like it’s your fault, but you have to stand your ground, talk about it with people who know and love you and just let them go if they’re determining your life in any way, as hard as it may be. 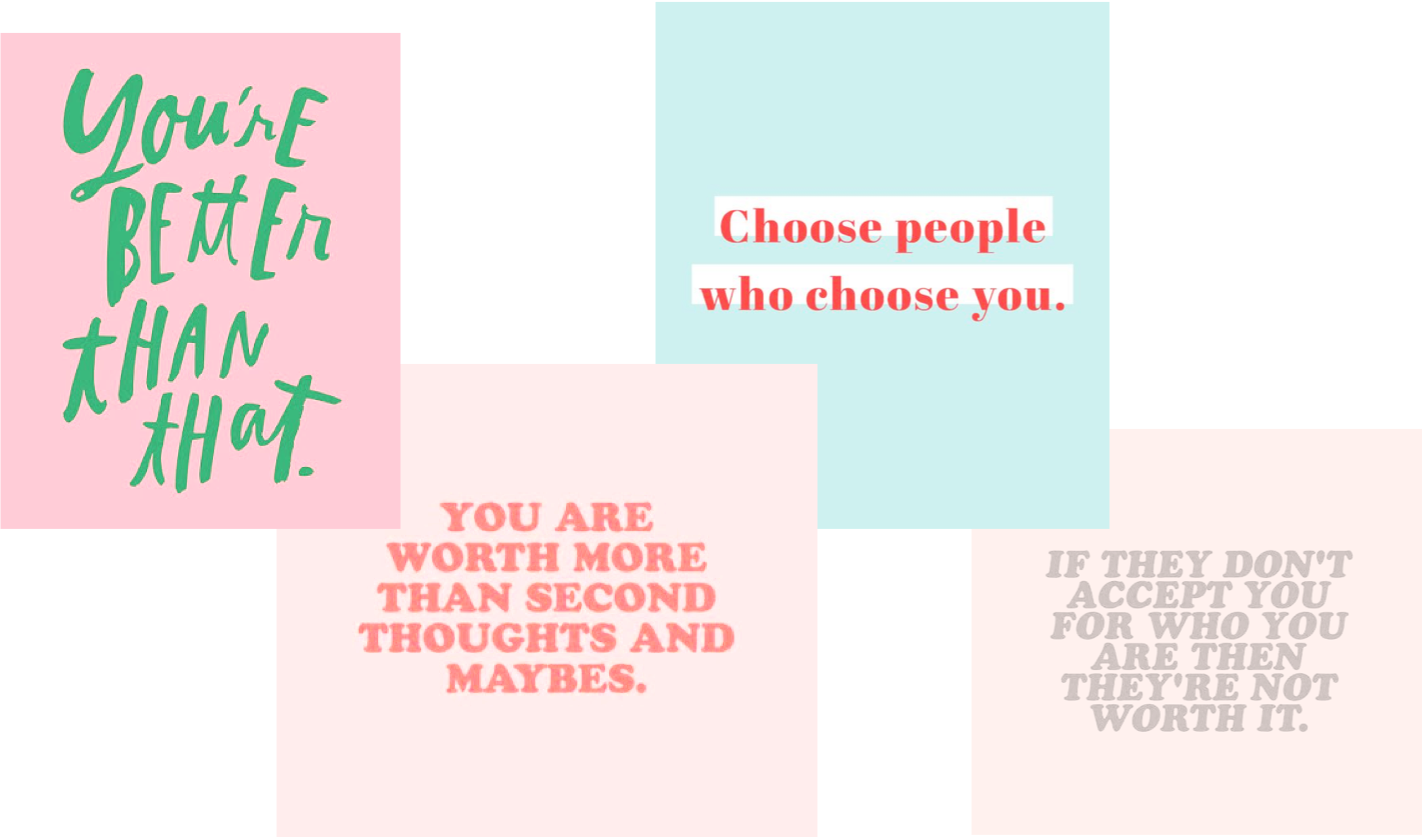 I did get a few other questions but seeing as I didn’t want this post to go on forever I’ll probably answer those in a future Q&A! Thank you all so much for reading and I hope if you’re going through any of the things I’ve mentioned, this post gives you a little bit of encouragement. Don’t forget my email and DM’s are always open of you ever need someone to listen or to just talk to someone who gets it.

My friends are amazing and I genuinely don’t know what I would do without them, so this is your daily reminder to go and make them feel special and loved and remind them what you admire about them!