Since it was around the time of Valentine’s Day when I wrote this, I decided to jump onto the soppy bandwagon. The guy in question’s name is Will, and he’s fab. Will and I have been together for a whole twenty-one months now- for some i’m sure this seems like just a snapshot of time, but for me, someone who’s never had a serious boyfriend and who wasn’t looking for a relatonship- it’s turned into a much-longer-than-I-expected amazing journey.
Will and I met at school in Sixth Form. When we first met I was a chubby, extremely underconfident girl who enjoyed plastering her face in makeup. Will on the other hand was slightly different- a geeky small lad who barely knew how to talk to the female kind (bless him). At first the only thing we had in common was that we took the same bus to and from school, and were in the same psychology class. Over the years of Sixth Form, we began to grow closer as we both matured and turned into teenagers much similar to the adults we are now. To me, we’ll always be those kids in love- the ones who barely got the courage to hint at going to prom together, the ones that used ‘psychology revision’ as an excuse to meet up and the ones who slowly but surely fell in love (betcha need a bucket already eh? 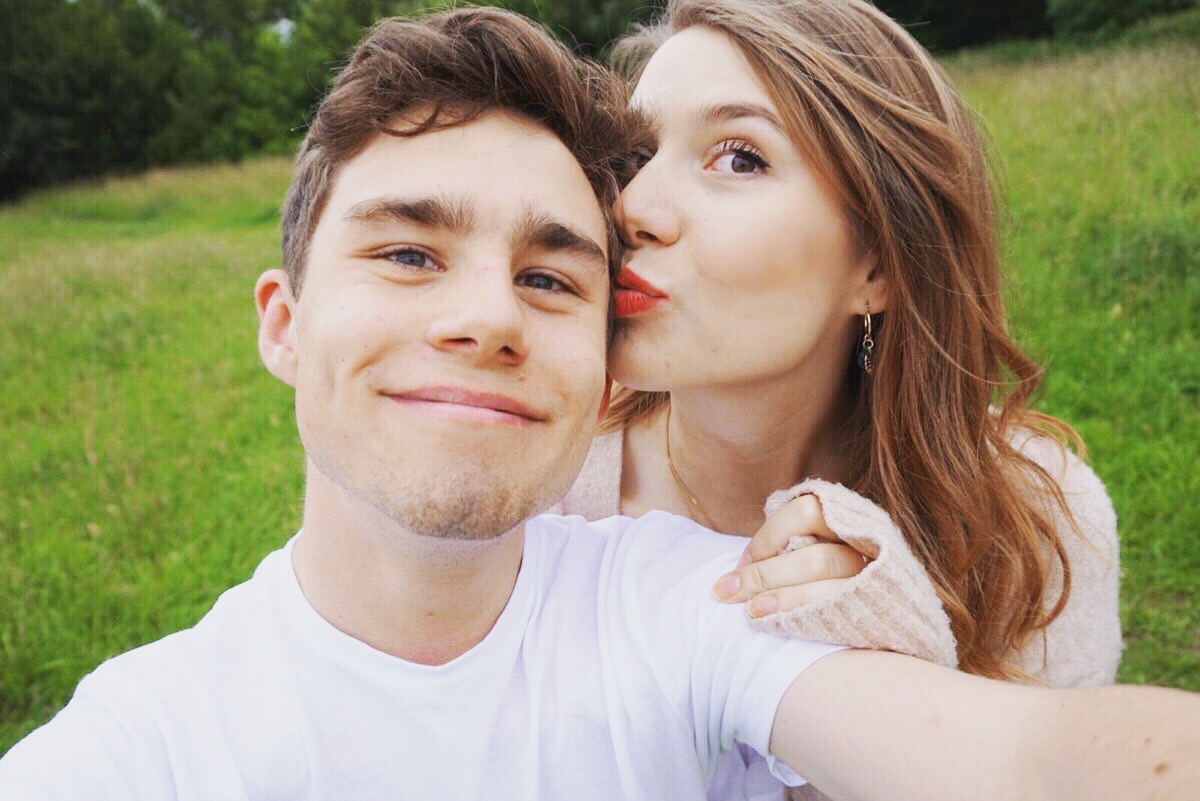 1. His Strength
Most people don’t know (and I’m sure he won’t mind me saying in brief detail) but Will has been through a heckkkk of medical difficulties throughout his life so far, including transplants, ligament damage and a whole load of other things. I admire his resilience and determination to live every day to its fullest much more than he knows and am so so proud of him for how many obstacles he’s overcome in his twenty years of life. Hopefully any hard times ahead for him will be a tiny bit easier with me by his side rooting for him and being there to hold his hand, but even so I know any challenge that comes his way he’ll face with grace and strength, with a beaming smile on his face.
2. His Smile
A cliche one I know. But honestly, this guy’s smile brings so much sunshine into any room. If I’m having a crappy day, just seeing his cheeky grin brings a smile to my face and I know so long as I’ve got that sunshine boy holding my hand, things are going to be a-okay. Will hates smiling with his teeth (because of transplant side effects) but I wouldn’t change any part of him (okay by this point you probably do need a bucket…) and his smile and cheeky grin is one of the first things I fell in love with.
3. His Sense of Humour
Again, people might say this is a cop-out one, but Will’s personality and sense of humour is one of the first things that really made me fall for him. He was always the cheeky boy at the back of the bus on the way home from school, making jokes and (kindly) teasing people which made me enjoy the ride home way more. As we became friends and eventually more than friends I realised his and my humour is basically the same- basically because he can be a wee bit more immature about boobs sometimes. The first time he ever came to my house, we were supposed to do an hour or so of psychology revision together but, of course, we got no work done (I think I wrote 5 words in total?) and ended up sitting at my dining room table for around six hours, just laughing and getting to know each other. Will’s humour is also very similar to my dad’s and (no I’m not going all Freudian I swear!) that sense of familiarity is probably one reason why I felt so comfortable around Will. Anyway, long story short, Will is a funny guy and I hope he keeps making me laugh for some time to come.
4. How he Loves Dogs…
…and just the way he loves in general. Will takes a pretty long time to open up to new people, but once he does you get to know one of the most loving guys you will ever meet. I’m not just saying this because I’m his girlfriend- from every dog he sees to every person he sees upset, he’ll treat them with so much care that you wouldn’t at first expect because he seems so shy/cheeky (depending who he’s around). This was a big realisation for me when we began our relationship as as I got to know the real him, I got to see how big his heart truly is- and let me tell you, it’s a big’un (no innuendos please ;)). Will, thank you for having a heart of gold and for loving people the way you do- imma lucky gal. (P.S. Can’t wait to put your love of dogs into practice one day…).
5. His Aspirations for the Future
A young boy with a whole lotta dreams- sounds like something from a Disney movie or something but that’s what Will is. Even though our dreams might not always match up (he’s still working on convincing me to move to Aussie land one day), I’m always interested in what his next big dream is. I love the way his face lights up when he talks about something he’s passionate about (usually travelling) and how he gets so excited about maybe doing it one day- even if it does seem a little ‘out-there’ at the time! And hey, maybe one day he’ll convince me to do some of these weird and wacky things with him while we keep loving each other a whole lot.
So there’s a little bit about my lovelyyy guy Will and only a few of his many amazing qualities- sorry if you’ve cringed at any point!
All my love,
L x